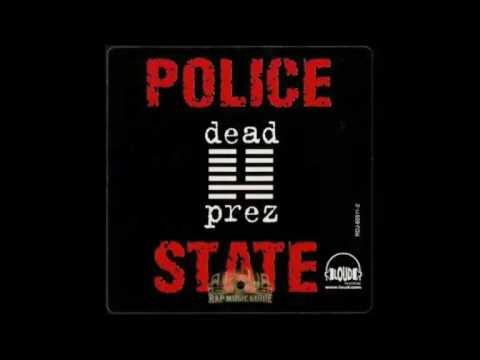 You have the emergence in human society of this thing that's called the State. What is the State? The State is this organized bureaucracy: it is the police department. It is the Army, the Navy. It is the prison system, the courts, and what have you. This is the State; it is a repressive organization. But the state and gee well, you know, you've got to have the police because if there were no police, look at what you'd be doing to yourselves -- you'd be killing each other if there were no police! But the reality is the police become necessary in human society only at that juncture in human society where it is split between those who have and those who ain't got

[Verse 1: Dead Prez]
I throw a Molotov cocktail at the precinct
You know how we think:
Organize the hood under I Ching banners
Red, Black, and Green instead of gang bandanas
FBI spying on us through the radio antennas
And them hidden cameras in the streetlight watching society
With no respect for the people's right to privacy
I'll take a slug for the cause like Huey P
While all you fake niggas try to copy Master P
I want to be free to live, able to have what I need to live
Bring the power back to the street where the people live
I'm sick of working for crumbs and filling up the prisons
Dying over money and relying on religion
For help. We do for self like ants in a colony
Organize the wealth into a socialist economy
A way of life based off the common need
And all my comrades are ready, we're just spreading the seed

[Hook]
The average Black male
Live a third of his life in a jail cell
Cause the world is controlled by the white male
And the people don't never get justice
And the women don't never get respected
And the problems don't never get solved
And the jobs don' never pay enough
So the rent always be late
Can you relate?
We living in a police state

[Verse 2: Dead Prez]
No more bondage, no more political monsters
No more secret space launchers
Government departments started it in the projects
Material objects, thousands up in the closets
Could've been invested in a future for my comrades
Battle contacts, primitive weapons out in combat
Many never come back, pretty niggas be running with gats
Rather get shot in they back than fire back
We tired of that, corporations hiring Blacks
Denying the facts exploiting us all over the map
That's why I write the shit I write in my raps
It's documented, I'm in it, every day of the week I live in it
Breathing it, it's more than just fucking believing it
I'm holding M1's, rolling up my sleeves an' shit
It's Cee-lo for push-ups now
Many headed for one conclusion
Niggas ain't ready for revolution

[Interlude: Chairman Omali Yeshitela]
(That's right, that developed?) me: brought me here and worked me like an
Animal. Built the political economy off my stolen labor. Made them rich
Made me poor

[Outro: Chairman Omali Yeshitela]
Why is it that Black people and everybody like us live in the kind of
Poverty and misery that we live in? Everywhere I look around me are nothing
But poverty and misery, on the one hand. And yet, what I'm seeing is that
Everywhere there's wealth and riches in the world it's in the white
Community somewhere, whether it's in Europe or whether it's right cross the
Street from where I was born
Back to Top
Back to Top
Close Sidebar