It was this bad and still took the Feds, even when the victim was a black police officer. The officers involved are on Kim Gardner's list of suspect officers,

"Four St. Louis police officers were indicted Thursday on federal charges claiming that three of them beat an undercover colleague during protests last year and all four then covered it up, federal prosecutors say.

The indictment also claims that several of the officers exchanged messages that “expressed disdain” for protesters and “excitement about using unjustified force against them and going undetected while doing so.”

Prosecutors allege that officers Dustin Boone, Randy Hays and Christopher Myers threw a 22-year police veteran to the ground and kicked and hit him with a police baton on Sept. 17, 2017, amid protests downtown that followed the acquittal of former police Officer Jason Stockley on a murder charge for the fatal shooting of Anthony Lamar Smith. They believed the undercover officer was a protester and assaulted him “while he was compliant and not posing a physical threat to anyone,” the indictment says.

Officer Bailey Colletta is accused of lying to a federal grand jury investigating the incident.

All four of the accused officers are members of the St. Louis Police Officers’ Association, which is providing them with legal representation, according to Jeff Roorda, business manager.

Roorda referred all questions to the officers’ attorneys, saying, in part, “We encourage elected officials, the media and the public to allow them their day in court without speculation about their guilt or innocence.”

Hays’ and Colletta’s lawyers declined to comment. The others did not return messages.

The undercover officer is identified only by the initials “L.H.” The age, gender and initials match only one officer: Luther Hall. Hall was working undercover aiding other officers in identifying criminal activity, sources said.

At the time of the assault, police sources said Hall suffered a bloody lip during his arrest.

But sources close to Hall said Thursday that injuries from the assault were much more extensive. He has not been able to return to work.

Hall was kicked in the face, which inflamed his jaw muscles to the point where he could not eat. He went from about 185 pounds to 165.

The cut above his lip was a 2-centimeter hole that went through his face.

He also sustained an injury to his tailbone, which still causes him pain, the sources said.

And in October, he underwent surgery to repair two herniated discs in his neck and one in his back. He is still wearing a collar to keep his neck immobile.

Myers destroyed Hall’s cellphone with the intent to obstruct any subsequent investigation, sources said, and Boone, Hays and Myers obstructed justice by conspiring to prevent information about the beating from reaching federal investigators. Colletta and Hays were in a romantic relationship at the time of the incident and investigation, the indictment says.

Colletta initially denied knowing Hall and denied that she had ever come into contact with him on the night of his arrest, the indictment says, and lied when saying he was “brought to the ground very gently.”

The indictment says the officers exchanged a series of messages during the days of protest duty.

Boone later replies that “it’s gonna be a lot of fun beating the hell out of these (expletive) once the sun goes down and nobody can tell us apart!!!!” On Sept. 17, he wrote that it was “a blast beating people that deserve it.”

Boone, 35, Hays, 31, and Myers, 27, all face charges of depriving Hall of his constitutional rights and conspiracy to obstruct justice. Myers also faces a charge of destruction of evidence relating to the cellphone, and Colletta, 25, faces a charge of attempting to obstruct grand jury proceedings.

U.S. Attorney Jeff Jensen declined to comment, saying he would not make any statements outside of a mews release announcing the charges.

St. Louis Public Safety Director Jimmie Edwards, who called the officers “outliers” in a statement, said the four officers have been suspended without pay from the police force.

In his own statement, Police Chief John Hayden said police sought the FBI’s help after learning about the allegations involving Hall.

“I am deeply disappointed in the alleged actions of these individual officers; however, it is in no way reflective of the hard work and dedication exhibited by the men and women of our Department who serve the community on a daily basis with integrity and honor,” his statement says.

Hayden said Hays had eight years with the department, Myers had three, Boone had two and Colletta, 18 months.

The officers could face up to 20 years in prison if convicted, although recommended federal sentencing guidelines will likely call for much less prison time.

Others alleged mistreatment
All four were among the 200 officers assigned to the police “Civil Disobedience Team,” prosecutors say, working protest duty.

They’re also among current and former officers that St. Louis city prosecutors have purportedly excluded from testifying in criminal cases.

St. Louis Circuit Attorney Kim Gardner, in a statement Thursday, said her office had dismissed 91 cases associated with the officers and would continue to review “cases where these officers’ testimony or involvement is fundamental.”

Following the alleged assault on Hall, then-Acting Chief Lawrence O’Toole asked police union leaders for a donation to cover the cost of a broken camera. Roorda confirmed at the time that the union’s nonprofit foundation, Shield of Hope, donated $500 to Hall to help cover those expenses or any other costs.

It was not immediately clear whether Thursday’s indictment would close out a federal investigation into police activity during the controversial police “kettle” on the night of Hall’s arrest.

St. Louis Mayor Lyda Krewson and O’Toole were among the officials who asked the U.S. attorney’s office to investigate less than two weeks later.

The mass arrest prompted criticism by a federal judge and a series of federal lawsuits alleging that police violated arrestees’ Fourth and Fourteenth Amendment rights to be free from unlawful seizure and their First Amendment rights to assemble in public and express their views free from retaliation.

The suits say arrestees were pepper-sprayed and physically injured even when attempting to be compliant with police orders.

Former Post-Dispatch reporter Mike Faulk, who was among the reporters assigned to cover the protests that night, was also arrested and has filed his own lawsuit.

Police supervisors have said that protesters blocking the street and refusing to disperse were given multiple warnings about possible arrest and the use of chemical munitions. They denied seeing any inappropriate use of force, saying pepper spray was used only on those who resisted police orders.

After the indictments were announced, Tony Rothert, legal director of the American Civil Liberties Union of Missouri, wrote that “there has still been no real accountability for the individual officers who engaged in the same behavior toward protesters. St. Louis officials must address this rampant lawlessness by its police.”

“We expect professionalism from every City employee,” Krewson said in a statement. “No exceptions. The charges brought against these officers today do not reflect the standards we hold ourselves to as public servants.”

Police have also said multiple officers have been injured by rocks and bottles thrown by protesters on various occasions.

“In a few instances, some officers have fallen short of the professionalism required to work in our Police Department,” Edwards said in a statement. “I take accountability and transparency very seriously. When a public safety employee acts outside the scope of their authority, it is imperative that they be held accountable to the fullest extent of the law.”

Hall was not a member of the Ethical Society of Police, a police association which represents primarily black officers.

But the organization’s community liaison, the Rev. Darryl Gray, said the group has been calling on the department to investigate the assault ever since it happened.

“Anytime we have police officers who are labeled as rogue officers, other officers need to know there is accountability and there are consequences to police officers who think they’re above the law or try to hide their own viciousness and hatred behind the badge and under the cover of darkness,” Gray said." 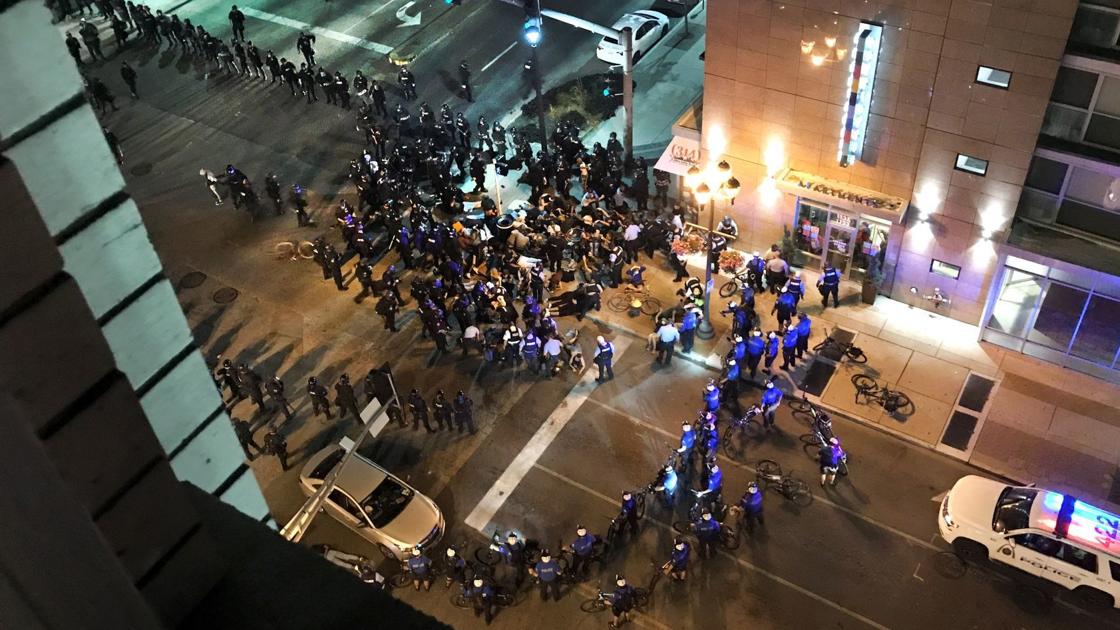 Three officers accused of kicking and beating an undercover officer during a night of police protests, and another officer lied to a grand jury to cover it up, prosecutors say.
Back to Top
Back to Top
Close Sidebar